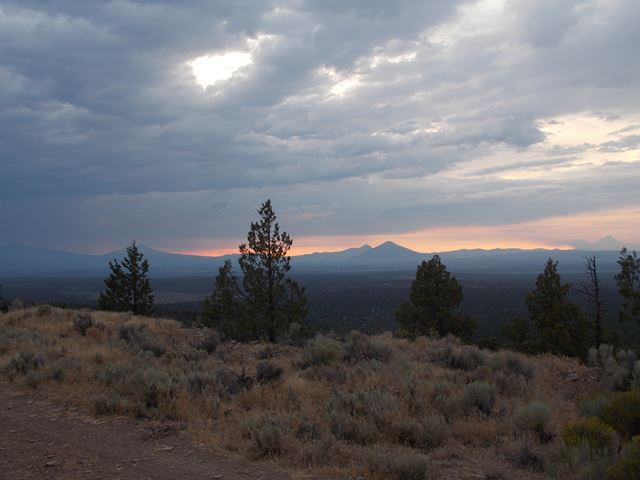 Well, I’ve made it to Prineville Oregon. So far I’ve gone 374.24 miles since I started on May 18th. It’s been an adventure to say the least. Yesterday I did a little 43 mile sprint from Sisters to Prineville in just over 3 hours. It was the first day with no rain which was pleasant. My bum wasn’t even tired when I rolled into town. I have to say I’ll be glad to get out of Oregon. Not because of the rain (though that is a factor) but because it feels like I’ve been here forever. The TransAm Trail takes a rather circuitous path throughout the state.

On Sunday I made it from Blue River to Clear Lake only to find out that they were completely full what with the holiday weekend. I ended up going up the road a piece to a wide spot in the road called Fish Lake. I was exhausted from my first real test in the mountains and pitched my tent on the side of the road. It was a very primitive campground to say the least. As in, nothing there. I was asleep by 7:30 and it started to rain. My tent become like a native American sweat lodge because I didn’t have the rain fly on properly. By Monday morning at 6am I was ready to go. I pretty much threw everything into my trailer soaking wet and set out for the Santiam Pass. It was pouring rain and the road had very little shoulder. There is still quite a bit of gravel from the snow season on the shoulders so it was bumpy. And steep. You can’t imagine how nice it was to see that sign – Santiam Pass, Elevation 4,817 Feet. You’d have thought I had just ascended the Alp d’Huez at the Tour de France the way I celebrated. And then…….descent. Six scary miles of what seemed like breakneck speeds. I was pumping my brakes the entire way down to keep the pads from glazing. I rolled into Sisters at midday, spent and soaked and hungry. Got myself a room and dried everything out.

I continue to meet some wonderful people along the way. Everyone is interested in my journey and why I would undertake such an adventure. I’ve run into many cyclists out on the roads. The routine is the same; pull over and introduce ourselves and share a little about where we are going. Most of the time it’s people coming from the opposite direction so you can share a little local knowledge about what lay ahead for the other person.

I’m taking a day to get some paperwork done and bills paid. Also going to do a little maintenance on my bike, get rid of the road grime and clean and lube my drive train. So far I’m pretty thrilled with my bike and trailer. Everything is performing well for the most part. The driver, well, he’s beginning to get the hang of it. I’ve lost I’d guess about seven or eight pounds and one full notch on my belt. I’m eating like crazy but still losing weight.

The pic attached is from my stay at Blue River. Bob and Krista Shafer own Reservoir Dawgs. Ya gotta love the way they exploited Quentin Tarentino when they named their restaurant. Just a couple of the great people I’m meeting along the way. And some of the best biscuits and gravy I’ve ever had. Stop by sometime.