On the road again…Sumpter, Oregon 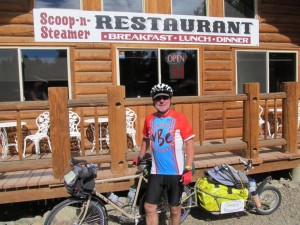 Greetings from Sumpter, Oregon. Yes, this is only my first blog entry since my journey started. It’s been a whirlwind the last few weeks in the run up to my departure. The last time I rode across the U.S. it was for only four months and really no big deal. This time however I had to prepare to be gone for the better part of a year. It’s interesting to unplug your life for a year. I sold my car, put everything into storage courtesy of West Coast Self Storage of Vancouver and vacated my apartment.

Most of you know why I’m doing this 12,000 mile trek. As I did the last time, I’m doing it for Share in Vancouver, Washington which serves the homeless and hungry in SW Washington. It’s an organization I’ve been affiliated with Share for nearly eight years now and they do a superb job at delivering services to the homeless and hungry men, women, children and families of Vancouver.

For those of you who don’t know, I am posting daily on Twitter at www.twitter.com/rollingacross and on Facebook at www.facebook.com/rollingacrossamerica. During the day I’m tweeting out my location and things like the song of the day. You don’t have to be a subscriber to Twitter to view what I am doing. At the end of each riding day I am uploading my Garmin GPS data to Garmin Connect and sending that out as a Tweet which you can view. If you click on the link in each Tweet you’ll be able to see a map of where I’ve been and statistics like speed, calories burned (always fun to see), average speed, top speed, temperature and vertical feet of climbing. Those Tweets go to my Facebook page automatically. I would appreciate it if you all re-Tweet and “Like me” on Facebook. I’m already starting to see a lot of activity using social media this time around. So much so that it is overwhelming at times. This is important to my fundraising efforts.

So, most of you know that I left on Saturday May 19th from Share House in downtown Vancouver. Mayor Leavitt came out to see me off which was nice. Around 10:00am 30 or so members of the Vancouver Bicycle Club came blazing in to ride out of town with me. Several of Share’s clients talked to me outside the shelter and thanked me in advance for my efforts. I was deeply moved by the whole experience to say the least. The VBC, Share’s board president Peter Fels and I rode across the I-5 Bridge and down Marine Drive toward Troutdale. Some of us had lunch together before I headed up to Government Camp. Dick Gordon rode part of the way up the hill with me before turning around.

I went to Government Camp the first day with a bit over 5,000 feet of climbing. A wee bit tired when I got up there. I stayed at the Mazama Lodge which is on the way up to Timberline. Max, the caretaker cooked a great dinner and breakfast for me the next morning. Then I was off to Madras where I spent a few days with my pop. Down in Warm Springs I was taking a break and hydrating before doing the climb out of the gorge and a lady stopped in a beat up old car. We talked for awhile and I told her what I was doing and why. She handed me a single dollar bill and said – “I can’t really afford this but I know there are people far worse off than me.” It was a monumental gesture in my opinion.

I spent a few days with my dad in Madras and Bend. We went fly fishing one day on the Deschutes River and that was a great experience. We each caught a few fish and had a marvelous day. My dad caught a nice 18” rainbow and a few others while I was relegated to the 12” – 14” variety. We went to Bend for a day and I ended up staying there until last Saturday.

From Bend I rode to Prineville and it was an adventure to say the least. It was windy and that is always fun. There’s a two mile stretch of 6% grade going down into Prineville and the headwind was so stiff I had to pedal downhill. The newspaper in town did a nice article about me for the Memorial Day weekend edition which you can read here.

On Monday I went from Prineville to Mitchell, a roughly 50 mile jaunt over the Ochoco Pass. As I did the last time I stayed at the Oregon Hotel. They have a bunk room there. On Tuesday I went from Mitchell to John Day. The first thing you do when you leave Mitchell in the morning is a nearly 2,000 climb on an average 7% grade. That got my attention. From Mitchell to John Day it’s about 70 miles or so. By the end of the day my trailer began to feel more like a boat anchor than a wheeled vehicle. Yesterday I went from John Day here to Sumpter. It’s a nearly 60 mile hop with 3 5,000+ foot mountain passes to negotiate. I did 4,866 feet of climbing yesterday.

Today I’m staying at the Sumpter Stockade which looks just like a fort out of the old west. Howard and Rita here built it with their own hands. Sumpter is an old mining town, very quaint. I have a bunkroom all to myself and am spending a bit of time catching up on correspondence and answering Facebook and Twitter requests. I’ve had roughly 500 or so emails the last couple of weeks so please be patient with me, I’ll try and get back to you all as I have time.

Two years ago when I did this stretch I was walking my bicycle and trailer up these mountain passes. This time my feet don’t touch the pavement unless I stop to drink some water or Gatorade. I’ve done 18,294 feet of climbing over the first 6 riding days and not once have I walked. Part of that is that I’m in better shape. And part of is that I am riding with clipless pedals courtesy of Camas Bike & Sport. Thanks Ed and Katina Fischer.

Tomorrow I’m off to Halfway Oregon which is 82 miles away. Like last time I’ll stay upstairs at the saloon. No doubt I’ll have spirited discussions with the locals. By the way, the Blue Mountain Eagle, the local newspaper in John Day did an interview with me yesterday before I left town. The article should be in next Wednesday’s edition or perhaps the following week. I’ll let you all know.

Thanks everyone for your continued support and emails and Facebook messages. It’s very heartwarming. More later from further down the road. And if you’d like to pledge a little something for every mile I ride go to – www.rollingacrossamerica.org/pledge. A half cent per mile donation will be $60 and feed 10 children for a weekend.