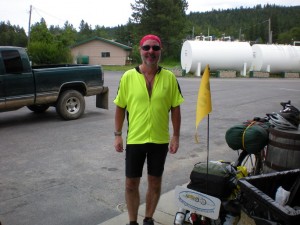 Greetings from Big Sky Country, Missoula Montana. I made it here yesterday after a three day, 173 mile push from Grangeville, Idaho bringing my total mileage to 986 since leaving Astoria. My back gave out on me after the grueling climb out of White Bird so decided to lay low for a couple of days and give it a rest. Lots of stretching and Aleve. Tuesday I made the trek from Grangeville to Lowell and stayed at the rustic Three Rivers Resort at the confluence of the Clearwater, Lochsa and Selway Rivers. I’m starting to run into a lot of cyclists now which has been interesting. People from all walks of life are riding the highways and byways of America. Although I haven’t caught up with her yet there’s a woman who is riding a unicycle across the country. I’m sure to catch up with her in the next couple of days. I rode for awhile with a guy from Australia, a teacher from Virginia and a guy from Kentucky.

Wednesday was a 66 mile ride from Lowell to Powell paralleling the Lochsa River. Slightly uphill the entire way but not really all that difficult. It’s rafting season on the rivers up this way and saw a ton of them as well as kayakers. Riding alongside the river I recalled that great film, “A River Runs Through It”. It was much like that for most of trip. Wednesday night I stayed at the Lochsa Lodge in one of their rustic cabins which just a bed and no indoor plumbing which is fine with me. Had dinner with a couple of guys and one of them showed me a photo he’d taken just that day of a moose in the middle of the road. Were it not for a car going by he thought for sure the critter was going to charge him because of the stink eye it was giving him. There’s a lot of wildlife up here – bear (brown and grizzly), elk (which makes for a fine burger by the way), moose, cougar, mountain lion and wolves. I’m told the wolves are very aggressive transplants from Canada. And by aggressive I mean they aren’t afraid of anything. And they are a lot larger than the native wolves that used to inhabit this area. What that means is that I’ll be camping with others as I make my way through Montana and Wyoming. I have pepper spray with me but I’m afraid that will just irritate them.

Yesterday I made it from Powell to Missoula over the Lolo Pass. It was a relatively good climb and then all downhill into Missoula for 40 miles. I’m getting better at my descents and not riding the brakes as much as I did when I set out a few weeks ago. Yesterday at one point I was cruising along at nearly 30MPH which on a bicycle is breathtaking when you aren’t used to it. Today I’m taking a day off and having some work done on my bike. Since Missoula is the headquarters for the Adventure Cycling Association there are a lot of bike shops in town. I pretty much toasted my brakes early on so having a new set of pads put on.

My next major milestone is West Yellowstone, some 329 miles southeast of Missoula. There’s one major pass of nearly 8,000 feet but after that it’s pretty flat until I get to Yellowstone. I’ve found a hotel/hostel there where I’ll spend a couple of days. I want to see a bit of the park while I’m there.