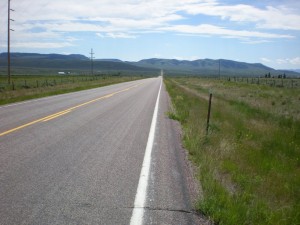 I have made my way down the Rocky Mountains and am now in Kremmling Colorado. As always, it’s been an adventure the last week and a half. In Lander I made the mistake of eating at a Thai restaurant and got sick as a dog. I lost weight I couldn’t afford to lose and had to take a couple of days off. Not a pleasant experience.

RollingAcrossAmerica factoid: My wheels have turned 1,449,336 revolutions since leaving Astoria over 1,868 miles.

Between Lander and Rawlins Wyoming there is 120 miles of nothing. My plan leaving Lander was to make the halfway point which is Jeffrey City and camp for the night. Well, I didn’t quite make it. It was very hot, mid 90’s and I had a bit of a climb out of Lander. I was pretty dehydrated from my ‘Thai’ experience and bonked in a major way after 45 miles. What is bonking? It’s when the glycogen our muscles use is totally depleted and they no longer function. I got to this wide spot in the road called Sweetwater Station and camped at the Mormon Handcart Historical Site. I’d read that they allowed camping there and took them up on their offer. It was really interesting. About 200 LDS were gathered at the site for a retreat and I was permitted to pitch my tent on the grounds. Since my original intention was to make it to Jeffrey City I had very little food. I was fed dinner and breakfast the next morning which was very nice. Good group of people who were very interested in what I was doing and why.

After leaving Sweetwater Station I was still pretty spent from my few days of being sick. I made it to Muddy Gap but just barely. For the first time in many years athletically I had no more gas in the tank. Nada, zero. The last 10 miles into Muddy Gap was excruciating and I knew that there was no way I could make the last 45 miles into Rawlins. I sat outside the gas station drinking a 44 ounce 7-Up pondering what to do since between Muddy Gap and Rawlins there isn’t a thing. I decided to do something I normally wouldn’t do and hitchhike into Rawlins. A young guy pulled up in a pickup truck and I asked him if he was going into Rawlins and he said no, he was heading to Casper which is in the opposite direction. I got out on the highway and tried to ride a bit but after about 20 yards figured out that 45 miles was totally out of the question. So, parked my bike and waited. After about 15 minutes I saw a pickup truck heading my way and stuck out my thumb. The guy who was heading to Casper decided to turn around and come back. Turns out he was just home from Iraq and told me that at some point in time when he needed help he hoped someone would return the favor. We loaded my bike and trailer into his truck and he drove me to Rawlins. A lifesaver to be sure. There was no way I’d have made it to Rawlins that day. The best I could have done is pitch my tent on BLM land and wait to recover a bit. Better to live and fight another day.

RollingAcrossAmerica factoid: By the time I reach Pueblo Colorado I will have done 88,000 feet of climbing since leaving Astoria. That’s nearly 17 miles or the equivalent of climbing Mt. Everest 3 times from sea level. I got this little fact from Alan and Chris who I met a few weeks ago. They have a GPS which records those statistics.

Spent one day in Rawlins recovering and eating like a horse to replenish my reserves then set out for the run south to Canon City Colorado. I made it to Saratoga the first day, a ride of 45 miles. Following Saratoga I took a short day and went to Riverside Wyoming and stayed in a rustic cabin at the Riverside Garage. On Tuesday this week I made my way to Walden Colorado bucking some pretty good headwinds. What amazed me the most was the flies. I don’t know for sure but I think they are horse flies, nearly as big as a California condor. And it doesn’t matter how fast the wind is blowing or how fast one is riding the darn things swarm all around you. When they land on you they latch on and boy, they sting. I was constantly swatting them off me. The stupid things can even latch on through riding gloves and shorts.

RollingAcrossAmerica factoid: I left Astoria weighing 175 pounds, the heaviest I’ve ever weighed and certainly the least fit. I now weigh 160. And I eat well over 5,000 calories a day!

Yesterday I made my way from Walden to Kremmling Colorado, some 62 miles over a pass near Steamboat Springs. I rode for about two hours in a violent rainstorm with lots of lightning and thunder. The temperature dropped to a point where I was shivering because I was soaked to the bone. Needless to say I was glad to get into town, dry out and warm up. Today I’m taking a day off and will head to Frisco Colorado tomorrow. I’ve been offered a place to stay tomorrow evening. For the next few days I’ll be climbing up to the highest point on the TransAm Trail, Hoosier Pass at 11,582 feet. After I cross the pass I will then head down to Canon City Colorado where I’ll connect with my pop. It’s a 5,000 foot drop down to Canon City from Breckenridge so I’ll get a chance to practice my descending skills. We’ll spend a couple of days in Canon City and a couple in Pueblo before I head out into the flat states. I know it’s going to be hot everyday out in Eastern Colorado, Kansas and Missouri. I’ll be packing extra water and fluids.