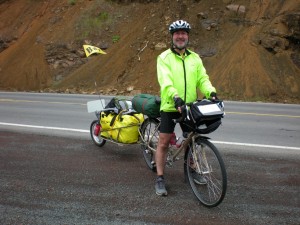 Well, yesterday I rode 70 miles from Mitchell to John Day. I was in the saddle for 8 hours total over one 4,300’ mountain pass. It was like and 8 hour spin class. Needless to say when I rolled into town I was spent. I stopped at the summit of the pass and watched a bald eagle soaring across a ridge which was incredible. Later down the road a deer ran out in front of me not 50 feet away and nearly startled me off my bike. There are snakes and road kill, elk poop and rocks. I’m certainly gaining strength and confidence with each passing day. And I’m learning what to do and not do. For example, never leave on a 50 mile trip without eating breakfast. I’ve never been a breakfast eater so I have to force myself to eat sometimes. Also, as the country becomes more rural know what is ahead and expect the unexpected. The other day I left Prineville without eating breakfast knowing (yeah, right) that there was a little market up on Ochoco Pass that I could stop at to eat. It was closed. So I ended up riding from Prineville to Mitchell – 50 miles – over a 4,700 foot pass fueled only by Gatorade and one PowerBar. Not very bright.

I spent a couple of days at The Oregon Hotel in Mitchell. It’s a restored historic hotel run by some really nice people. I stayed in the hostel for $15 a night but had he entire place to my own. Mitchell is a sleepy little town, very quaint. Then again, I’m seeing quite a few of those on this journey. And the people, my, what a treat. Some of them are real characters. In a way I feel like I’m in a living documentary film about small town Americana. Let me give you an example. Yesterday I was riding to John Day and stopped in Dayville (yes, that is a real town in Oregon) at the country store to get a bite to eat. The owner, Don Jones, proceeds to give me a history of the store from when it was built in 1894. And tells me about ‘Bill’, the resident ghost who haunts the place. Now Bill is a small man, maybe 5 foot or so. He wears a white hat and doesn’t smile much. Don has seen him twice and tenants of the apartment behind the place many times. From time to time music and the sound of dancing can be heard from upstairs where the dance hall and saloon used to be. When you are driving 26 stop by and talk to Don, I’m sure he’ll regale you with the story.

I’ve come just short of 500 miles since starting. In a couple of days I’ll be in Baker City and start making my way north to Idaho. I haven’t run into any cyclists in a couple of days but as I get further east I’m sure I will. So far it is everything I didn’t expect it would be. A lot more physically demanding for sure. At times I’ve had to dig deep to find the strength to pedal another stroke. The mountains are a killer. At times the grades are so steep I end up walking my bike and trailer (that blasted trailer!) for awhile. God keeps me going at times when I can’t go any longer. I had no idea just how out of shape I was when I left. After two and a half weeks however I am finding my stride. Which is good because I have nothing but mountains for the next 1,500 miles.