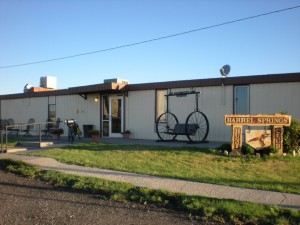 I’m sitting in the Barrel Springs Hunt Club in Horace, Kansas. Today I bid adieu to Colorado and for the next five hundred miles will be in Kansas. After leaving Kremmling, Colorado I headed to Frisco which is a nice little town near Breckenridge. I’d met the President of Bighorn Rentals the second day I was on the riding on the Oregon coast. He told me to contact him when I got to Colorado and he’d comp me a room. I wrote John Forrest a few days before heading to Frisco and as promised had a nice room waiting for me. I spent took an off day in Frisco which allowed me to explore the area. Also to eat some mighty fine food that was unavailable for the last couple of months. Ahi, polenta and all kinds of good stuff. I reckon that in most of the towns I’ve cycled through if I mentioned polenta someone would say guzentheit.

What was great about the stretch between Silverthorne and Breckenridge is that there is a great bike trail which allows cyclists to ride off the highway. It’s probably the best bike path I’ve ever been on. After Frisco it was a quick hop up to Breckenridge where I stayed at the Fireside Inn, a B&B/hostel run by a couple of British ex-pats. Very nice place. Breckenridge was a little touristy for me. I have grown used to slightly less affluent towns and Breckenridge is a place where the moneyed people go. Felt a little out of place.

After leaving Breckenridge I climbed to the highest pass on the TransAm Trail – Hoosier Pass at 11,542 feet. Admittedly there was some trepidation on my part when I knew that was coming. As it turns out however it wasn’t as hard a climb as I thought. The last couple of miles were a little grueling but mostly from the altitude.  The descent from Hoosier Pass was pretty thrilling. I’ve gained a lot more confidence going downhill and for the most part let my bike run. It’s a thrill to be going at 40MPH downhill. 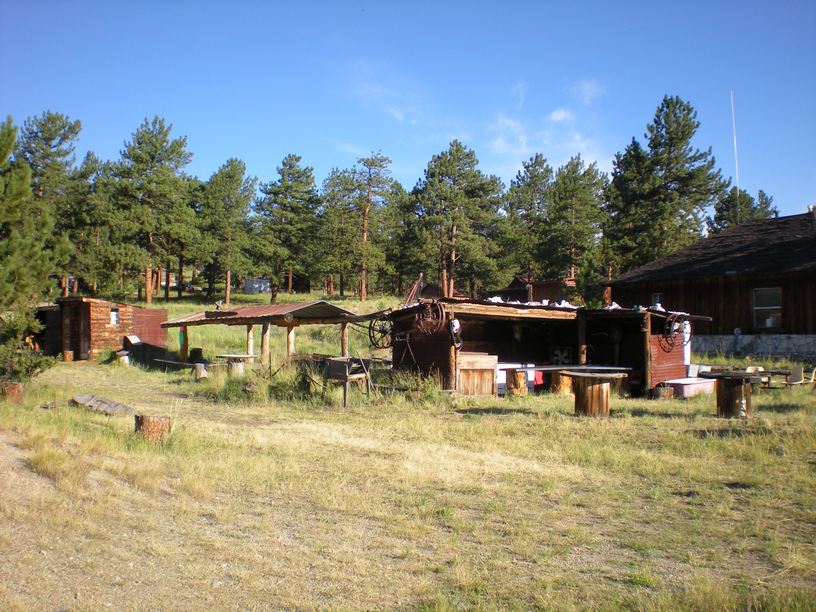 I’m not sure I can properly articulate what kind of place Guffy, Colorado is. Eclectic would be an understatement. It’s a bit off the road but I’d heard about it from other cyclists so decided to put in there following my trip from Breckenridge. There’s a climb into town and by the time I pulled in I was pretty pooped. I made my way to the garage where I was greeted by Bill and Charley. As far as I can discern Bill sort of runs the town. He owns a bunch of rustic cabins, a bunkhouse and the town museum slash city hall. When I pulled up Charley handed me a beer and after quickly quaffing it down another. I’ve done a lot of traveling in my life – five continents and twenty eight countries – and nothing compares to Guffy. It’s the most interesting town I’ve been in since leaving Astoria. Bill has so much stuff laying about his garage that it boggles the mind. Old cars, old trucks, all manner of collectible. Not to mention the statues made of the skeletons of animals. The town mayor is a cat named Monster. Each July 4th they hold their annual Chicken Fly. What’s that you ask? Well, what they do is set up a launching pad behind the museum. On the launch pad there’s a felt lined mailbox where they stick chickens. Then people take turns pushing them out of the mailbox with a toilet plunger. The record is 138 feet which happened several years ago. Bill was pretty disappointed because this year he bought some chickens from England in effort to break the record. Three of the fine birds went 135 feet but not a one exceeded the record.

(Note: for you PETA types I was advised that no chicken has ever been harmed)

After Guffy I met up with my dad and we headed to Canon City. Or should I say he met up with me. In any case we found each other a few miles from Guffy and after lightening my load by transferring some of my stuff to his Jeep we headed to Canon City. We spent a couple of days in Canon City where we played tourist and went to the Royal Gorge Bridge which hangs 956 feet above the Arkansas River. So high that BASE jumpers use it to parachute from. We took the Royal Gorge Rail up into the gorge as well. After Canon City we went to Pueblo, Colorado which was nothing like I’d expected. Pueblo was actually quite the steel town earlier last century. It was kind of the Pittsburgh of the west. The local steel industry had 20,000 people on the payroll at one time. The mill still operates and mostly it puts out a lot of rail these days. It was good to spend some time with my pop.

I left Pueblo on Saturday and made my way to Ordway, Colorado. There’s a great hostel there and after leaving my pop made my way there and was in town by 11:00am which gave me most of the day to enjoy the town fair. Yesterday I went to Eads, Colorado. I won’t go into specifics but if I never visit Eads again it will be too soon. The place I stayed was pretty bad but it was the only place in town. And I didn’t want to camp because of the oppressive heat and humidity. Today I was up at dawn and on the road early to beat the heat. At this moment I’m sitting at the Barrel Springs Hunt Club in Horace, Kansas about fourteen miles from the Colorado and Kansas border. A hunt club? Yes a hunt club. Pheasant hunting is a big thing here and the club has people coming in from all over to hunt on their nearly 6,000 acres. I have the place to myself. 24 rooms and a big great room, air conditioning, big screen T.V. and Wi-Fi. One of the owners, Shari, took me into town (Tribune) today to buy some food for tonight. They don’t have a restaurant but they do have a huge kitchen for the hunting parties. It’s one of the nicer places I’ve stayed the last couple of months.

And now I will be in Kansas for the next five hundred miles or so. Since leaving Pueblo I have been in pretty hot weather. The only saving grace is the fact that for the most part the roads are flatter than a pancake. The scenery is pretty unimpressive after the beauty of the Rocky Mountains and the west. Nothing but nothing for as far as the eye can see. Boring really. It is hot and humid. Where before I was in no hurry each day to get on the road I am now in a mode where I’m up and riding at dawn so that I can get to where I want to be by midday. Towns and services are few and far between so I have to do a bit more planning and carry a lot more fluids and food. I’m going to build up my mileage over the next week or so to 75-80 miles a day so that I can get across Kansas and Missouri.