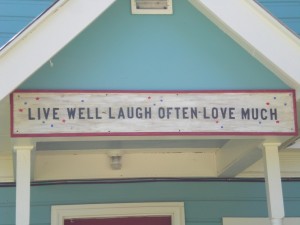 Walking into the saloon I tell the barkeep, “Hi, my name is David Jones and I have a room upstairs reserved tonight, number ten.” An older dignified gentleman was sitting across the room at the video lottery machine, Stetson sitting squarely on his head. A doppelganger for Sam Elliot including the massive neatly groomed moustache. He turned to me and inquired, “You aren’t one of those left wing environmental wacko’s are you?” It must have been the straggly beard I’m sportin’ and the ‘do rag’ on my head. I wasn’t exactly spoiling for a fight, mostly just wanted a hot shower and meal after making the fifty four mile ride in from Baker City. I looked him square in the eye and said firmly, “I’m a dyed in the wool libertarian who’s supported Ron Paul for half my life. I subscribe to the Austrian School of Economics more than the Keynesian crap of Bernanke and Greenspan. We should repeal the 16th Amendment, abolish the Federal Reserve and return to the gold standard. And yeah, I think we could do a better job with the environment starting with widespread deployment of nuclear power and stop being held hostage by the Saudi’s and Hugo Chavez while burning all those fossil fuels. Any other questions?” We looked each other in the eye for a minute and then he slowly turned back to his lottery machine, ”You can stay” he said.  Well, that’s how it played out in my mind but what I really said was this, “Nope, just a weary cyclist looking for a bed and a shower.” Welcome to Halfway Oregon, population: Conservative.

This is day 24 and I’m sitting in the Stockman listening to a rather surreal conversation amongst the locals ranging from the brown trout in the local lakes to national politics. Suffice to say Barack Obama would probably not be welcome here. A local gent just gave one of his friends a birthday present, a Bowie knife with an eight inch blade. Good for gutting that next deer. A man named Cash is singing a song about a boy named Sue. Some young buck is celebrating his 21st birthday drinking Jim Beam while I ponder the fact that I have a son older than him. Where has the time gone?

Tomorrow I finally get out of Oregon, seventeen more miles to go and I’ll be in Idaho. Nearly 650 miles on the yellow brick road in the land of Ducks and Beavers. I’ll make Cambridge, no, not the university in England but the town in Idaho. As it turns out this has been one of the wettest springs on record. Roads and bridges have been washed out and flooded. Just last week the water was pretty deep in Richland, a town I rode through yesterday. If I’d come through here a week ago it’s likely I would have been delayed a couple of days.

I met a guy named Eric in Baker City the day before yesterday. Soon to be grad student, he’s from So Cal so we had a lot to talk about. We had dinner and a beer at the local brew pub. He got a late start yesterday and caught up with me in Richland. We made it up the pass together, me walking some of the time while he motored up. Damn, to be young again! It was really windy in places yesterday and coming from the side to boot. With my trailer there’s a lot of sail area and I get blown about to and fro. It can be a little frustrating at times. Going through the canyon with a slight downhill the wind shifted to my back and I was making some pretty good speed. The road was the narrowest I’ve been on with almost, strike that, absolutely no shoulder in places.

I’ve been doing a lot of thinking the last few days. Seems to me that this is the opportunity of a lifetime. Why rush it? Some people who do this ride six days a week and ten hours a day. And why? I mean, how do you enjoy, really enjoy the experience? I’ve taken a few days off this first three weeks but don’t regret it a bit. Yes, part of that is because I wasn’t exactly Lance Armstrong when I started but a big part of is that I am really enjoying the experience. When I roll into some of these towns they turn out to be so much more than I thought they’d be. The people are interesting and interested. I have found that most folk are really interested in what I am doing for Share and ask a lot of questions. I think I’m going to take my time getting back east and savor the whole experience. I’m starting to work on my book. The working title is – Spokes: America, One Revolution At A Time. I’ll put some excerpts on my blog in the next couple of weeks for those who are interested. It isn’t going to be written in a linear fashion about this journey only but more essays on life, faith and politics. And yes, this little jaunt across the U.S. of A.