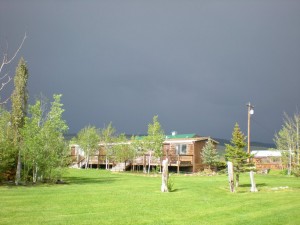 Each afternoon, warm moist air comingles with colder air and thunderstorms are born. Towering cumulous clouds begin to build tens of thousands of feet into the sky. It’s a sight to behold and one I’ve seen time and time again. This dance plays out nearly every day during the late spring and summer in every corner of the country.

It’s a habit I developed a couple of years ago when I first rode across the country. Ever mindful of the weather I look around for potential shelter spots in the afternoons when these storm clouds begin to mount. It may be an old barn or an abandoned building. Or it could be someone’s home that I can ask politely for temporary shelter. The last place one wants to be during a lightning storm or hail is out in the open. It happened to me one time in Wyoming when I was pelted with hail and it’s not something I want to do on a regular basis. Another time in Colorado I had lightning strikes so close to me that there was no discernible time lapse between the lightning and the thunder.

In a very real sense the homeless endure storms each and every day. They look for shelter and wonder where it will come from. For those that are particularly vulnerable, children, this must be scary and confusing. But really, it doesn’t matter what age you are. If you don’t know whether you’ll be sleeping outside in the elements it has to be disconcerting. Even more so is wondering where your next meal will come from.

Every single day I ride through towns that are distressed economically. Last week in Cambridge, Idaho I went to a diner and found the owner was shutting it down that day. I was among her last customers. She told me that her business had declined by 20% over each of the previous four years and it was no longer viable. Rising fuel and food costs had driven her out of business. Fortunately for her she had family to go to. Others aren’t so fortunate. There are tens of thousands of people who are homeless each day. And many more are one economic event away from homelessness. These people live on what I call the edge of homelessness.

Share in Vancouver, Washington provides services to the homeless and hungry. The network of shelters for single men, women and families is invaluable to the community. It serves nearly 100,000 hot meals each year to those who are hungry. It prepares and distributes backpacks with food to over 1,600 children in 60 plus schools each week who live below the poverty level. Its various programs touch lives young and old.

So, I’m in Missoula, Montana today. For those of you who have been following me on Facebook and Twitter you already know this. It’s been a good first couple of weeks. I’ve met a lot of great people along the way which I expected. A man in Oxbow, Idaho bought me lunch one day when he learned what I was doing. We struck up a conversation at a diner about his native country, Bosnia, and how the war had affected him and his family. In countless conversations in diners and taverns I’ve learned that the economy is still in decline. However, just like last time I’ve been amazed at the resiliency of folks. I had a great experience in New Meadows, Idaho. Met two gents who gave me the two bit tour around the area. One guy, Dave, looked a bit like Kenny Rogers and a bit like Santa Claus. He showed me around the valley and explained the geologic features and history of the area. Another guy, Jeff, took me up to McCall which is about nine miles away and showed me around that area. It was very generous of those guys to show me around.

Tomorrow I head to Great Falls, Montana by way of Ovando and Lincoln. From there I’ll head up north to Havre and catch the Northern Tier and start heading east. I went to the Adventure Cycling Association headquarters today and got new maps for a couple of segments of the Northern Tier. Due to truck traffic in North Dakota they’ve had to reroute cyclists. A couple of people have been killed up that way so their cartographers worked hard to redo the maps. Also, had to buy a new handlebar bag because my old one finally gave up the ghost. I got a little rip in the fabric where I attach it to my handlebars and did some field repairs using super glue and Gorilla glue. With all the jostling around I knew it was a matter of time before it fell apart.

The weather has been generally good although I did have some rain coming up the Lochsa through Kooskia and Lowell. Took a couple of days off in Lowell because the rain was torrential and there was gravel on the very narrow road. I’ve only seen four cyclists the whole way so far. People are getting a late start this season apparently.

For those of you keeping score at home here’s what I’ve done so far:

More from further on down the road…..