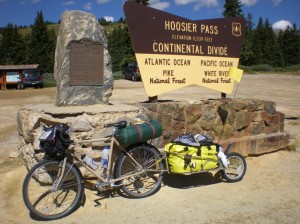 Where’s Waldo? That’s what my daughter asked me when she called the other day. Well, Waldo is in Lander, Wyoming. It’s been awhile since I sent out an update so thought I’d better catch everyone up. Over the last week and a half I’ve toured Yellowstone and am nearly to my next major milestone which is Rawlins, Wyoming.

I’ve covered some 1,562 miles now (see trip log for details) and over the last four days I’ve crossed the Continental Divide four times. There’s been a fair amount of climbing including the second highest pass on the TransAmerica Trail – Togwotee Pass at 9,658 feet with 2,700 feet of climb. Did that the day before yesterday and it was really something. The only break I got was a four mile stretch under construction when I had to load my rig into a pilot truck because they couldn’t permit cyclists to ride through the construction zone. One of these days I’m going to sit down and calculate how many vertical feet I’ve climbed over this journey. I suspect it’s a big number. The good news is that for the most part I’m peddling instead of walking these days. When I first started I was intimidated by the hills on the Oregon Coast and now they look like speed bumps compared to what I am doing these days.

When I last wrote I’d encountered a herd of cattle outside of Jackson. A lot has happened in the meantime. Most notably I went through Yellowstone which was impressive. Really beautiful country. Mind boggling actually. I spend a couple of days in West Yellowstone which is the west entrance to the park. Nice little town but very touristy which I suppose is to be expected. And wow, pricey. Anyone visiting can expect to pay highly inflated prices for just about everything. Last Wednesday I entered the park and made my way to Grant Village. What I was totally unprepared for was the amount of traffic. I’m talking hundreds of cars. I ran into several traffic jams with people gawking at the wildlife that inhabits the park. It’s amazing how a single moose can bring progress to a screeching halt.

A couple of guys are asleep in their tent when they are startled by a bear rummaging around their camp. One guy calmly climbs out of his sleeping bag and begins to put on his running shoes. “What are you doing?!” his friend asked. “You’ll never outrun a bear!” The guy putting on his shoes looked at his friend straight in the eye and said, “I don’t have to outrun the bear, I just have to outrun you.”

So Wednesday I made my way from West Yellowstone to Grant Village and camped out. Upon arriving I was informed that a grizzly bear had been spotted in the camp a couple of hours earlier and that it was important to put everything in the steel bear boxes at each campsite. By everything I mean any and everything that gives off a scent – cosmetics, food, Chapstick, sunscreen, even water bottles.  Needless to say I complied. In the middle of the night I was awakened to the sound of wolves making quite a racket. Either they were in the process of securing dinner or maybe they were getting into someone’s 12 pack of Keystone Lite. My camp partner, another cyclist and I both agreed the next morning that they were pretty close by.

After leaving Yellowstone I found my way to a little wide spot in the road called Moran and stayed in a rustic cabin. Gave me a chance to catch up on laundry and some bike maintenance. Knock on wood my bike is really doing well with no mechanical issues so far save for some minor adjustments. Thursday night I was having a little insomnia so got up and went outside. The sky was awash in stars. It was pretty spectacular. A moonless night with no ambient light from city lights allowed every celestial body to shine bright. I saw several satellites go by which is something we don’t see much at home because of the cloudy skies. It was really something to behold.

I’m seeing a lot of cyclists these days and have ridden with several now for at least some distance. It’s really interesting to hear everyone’s story and why they are doing it. They cover every socio-economic status and age. Some are going fast and some are going at a more leisurely pace.  I’ve met people in their early 20’s all the way up to their 70’s. There have been groups of people and solo riders. Some are doing it just because and some are doing it for a cause.

I had a little scary incident last week which woke me up. I was riding to Sheridan and was just outside of Twin Bridges Montana when I was run off the road by a truck. Most people swing wide when they see a cyclist or slow down. And especially on straight stretches where they can see that there is no oncoming traffic. I was on a stretch of road with very little shoulder and was pretty much hugging the line. A truck comes along doing about 70MPH not three feet off my left shoulder and blew me off the road into the weeds. I kept upright but it sure was a scary moment.  There wasn’t another vehicle in sight so he could have easily swung out half a lane or so. I clearly articulated to him that he was number one on my dance card. It’s almost certain that I won’t be using Mayflower Moving & Storage anytime soon.

Here in this part of the world they engineer their roads with a little something called rumble strips. Now what these are is these massive grooves carved perpendicular into the shoulder of the road. These are used I believe to alert drivers that doze off and wander off the road. I can tell you that as a cyclist these doggone things are designed to separate your brain from your spine or rattle the fillings out of your teeth. It doesn’t matter how fast you roll over them they will shake you up. I talked to one guy who broke a couple of spokes going over them.

Tomorrow I’ll start the last couple of days to get to Rawlins. My dad is going to meet me in Canon City Colorado on the 27th so I have plenty of time to get there, only 476 miles to go and over two weeks. We’re going to do a little male bonding, spend a couple of days in Canon City and then a couple in Pueblo. At that point in time I’ll be half way to getting across the country and heading across the flat states.