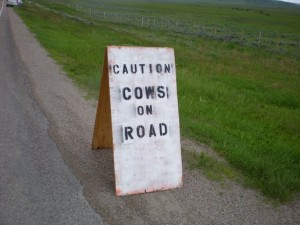 Well, that doesn’t happen every day. Being stopped by a herd of cattle that is. Today as I was riding from Jackson Montana to Dillon I came upon a sign on the side of the road – CAUTION: COWS ON ROAD. I moseyed on down the road a piece and yep, there were cows in the road. Lots of ‘em. As you can see from the photos I was pretty much stopped in my tracks for awhile. The cowboys were driving them from one grazing area to another smack dab down the middle of the highway. As they got closer I was a little concerned and didn’t know what to do. Do I turn around? Do I just sit there and hope they have the sense to walk around me and not through me? Luckily a local came along in his truck and had me follow behind him as he pushed them aside. 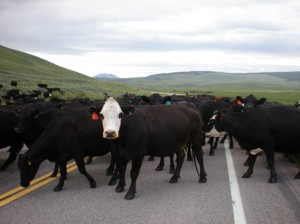 As I said, I’ve made Dillon Montana since I last wrote from Missoula. After I left Missoula I went to the town of Hamilton which was a great experience. I stayed with a couple who open their home to cyclists and had my first home cooked meals in over a month. They do so because their son did the TransAm last year and was the recipient of so much hospitality that they decided to return the favor to others. Now, Hamilton is a nice town typical of Montana except for one thing. Just down the street from Carl and Terry is the Rocky Mountain Laboratory. Sounds pretty benign right? Yeah, it’s anything but. What this building houses is a Biohazard Level 4 facility. This includes such bugs as Ebola, Marburg, Dengue and few hemorrhagic fever viruses. The kind of stuff that horror movies are made about with nearly a 100% mortality rate. When the government wanted to build it the town folk weren’t so hip to the idea but they didn’t win the battle.

From Hamilton I went to Darby which is a quaint little town that looks like a movie set. I stayed in a cabin and just ambled around town. On Monday I made the nearly 60 mile trek to Wisdom over the Chief Joseph pass at 7,200 feet. It was a grind but not too bad. This whole area is Nez Perce country. Chief Joseph is revered for how he stood up to the white man and refused to be put on a reservation. Even today his strategies are studied at West Point and other military colleges. When I was a few miles outside of Wisdom and entering ‘The Big Hole’ I was attacked by what I am calling the Montana Air Force. Mosquitoes. Trillions of them. And nobody warned me in advance. The Big Hole is this valley that is literally thousands of square miles of some of the most pristine ranching country you’ve ever seen. What they do is irrigate it by flooding much of it to grow alfalfa. It becomes a breeding ground for the little critters until the grass is cut in August. I was covered with them even after spraying on a copious amount of DEET.

Yesterday I made my way from Wisdom to Jackson which is a wide spot in the road. It’s renowned for its hot springs lodge which was why I stopped. They were discovered by Lewis and Clark and are incredible. The lodge is pretty nice for anyone who happens to be in that neck of the woods. Today I made it to Dillon over a couple of 7,000 foot passes. Just as I was rolling in the heavens opened and it started pouring and hailing. I’m growing accustomed to the afternoon thunderstorms that seem to be a common occurrence here in big sky country. It’s amazing really. One minute it will be sunny and the next there’s lightning and thunder. I was told yesterday that just last week they had eight inches of snow in Jackson which would have made cycling fun.

Tomorrow I’ll amble on to Twin Bridges which has a great cyclist’s camp from what I’m told. Then on to Ennis on Friday and Saturday I’ll be in West Yellowstone. I have reservations at the hostel for three days where I’ll park my bike and do some touring around the park by bus. Let someone else do the driving for a change. As of today I’ve covered 1,182 miles and nearly 28% of the TransAmerica Trail. So far I am most impressed with Montana. It’s simply incredible country here. There’s a reason it’s called Big Sky Country because that’s exactly what it is. Big, expansive and beautiful. At times it seems like I can see a hundred miles.