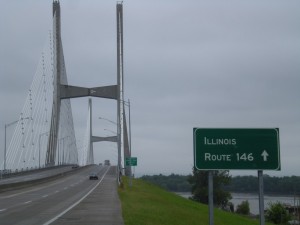 I’ve made my way to Bowling Green, Kentucky after taking a rather circuitous route since leaving Missouri. As you recall, I went off the TransAm Trail awhile ago and am now blazing my own path across the United States. A few days ago I crossed the Mississippi River into Illinois out of Cape Girardeau Missouri. It was an emotional experience for a number of reasons. The Mississippi River is huge for one and really impressive. Second, it does symbolically separate the east from the west. And crossing it meant that I had ‘officially’ crossed over and was in the eastern part of the country. At that time I’d done 3,000 miles and now my odometer reads 3,337.78 miles.

Once I crossed into Illinois I only spent a couple of days there before crossing the Ohio River into Kentucky. This is where it got kind of interesting. I had no idea where I was going and ended up in a part of the state that was, um, rural. It felt kind of like I was on the set of Deliverance. The roads were narrow to say the least and the dogs were plentiful. Over the last couple of weeks I’ve been on roads that are so far off the beaten track and had so many dog attacks you wouldn’t believe it. I took to wearing pepper spray on my wrist in case one got too close. I haven’t had to use it yet but have come close a few times. These things come barreling out on the road and all one can do is get out of the saddle, drop a gear and sprint. And hopefully outrun them. I’m a high cadence rider meaning I turn the crank about eighty five or ninety times a minute but when the dogs start running at me I turn that up a couple of notches. I’ve been reluctant to use my spray because I’ve heard the owners will climb in their vee-hicles and chase you down and beat the tar out of you.

I made a decision a couple of days ago to change my destination. Since I’m way off the trail already and practicing my land navigation skills I’ve decided to get across Kentucky and head slightly south to my brothers place in North Carolina. He and my sister in law live about eighty miles from Wilmington on the Atlantic Ocean. So, I’ll get to their place, drop off my trailer and beat feet to the Atlantic Ocean. It isn’t officially the TransAmerica Trail but the way I’ve been pedaling that cow is out of the barn already. I’ll have done the Pacific to the Atlantic and well over forty two hundred miles which is perfectly satisfying. And there’s something to be said for doing the last third of the journey navigating on my own.

I’ll be flying home in late September or early October. This journey has been hugely satisfying for me personally. A challenge to be sure and at times it has been arduous. From a personal perspective it has exceeded my dreams and expectations. Where it has fallen short is that I haven’t met my objective of raising money and awareness about homelessness and hunger on the scale I’d hoped. That’s my fault. I really had no clue what I was getting myself into. Basically I was a pudgy middle aged man so ignorant about bicycles and cycling that it took me the better part of two months just to get a handle on the whole cycling thing and into some semblance of physical shape. As it turns out the muscles used to propel myself out of my recliner to get a beer out the refrigerator are different than the ones required to pedal myself and sixty pounds of gear over a ten thousand foot mountain pass. Where I was a shade over one hundred and seventy pounds when I left now I am right at a buck forty now. The other days I pulled my jeans out of my bag which I haven’t tried on in a couple of months and they fell off when I put them on. It was comical. I’ll have to buy new pants when I get home.

Because I haven’t met one of my primary objectives – I wish I could have a do-over – I’ve been doing a lot of thinking and believe I have an idea on how I can do just that. I’m in the process of developing a business plan to do something next year that will be a little bolder and fulfill the promise of bringing awareness about homelessness and hunger. And raising some money. I’ll be piping that plan to a few people to evaluate before making a formal announcement. Suffice to say it has the potential of making quite a splash.

As I’ve pedaled across the heartland of America I’ve often found myself in towns and cities that are enduring great economic hardship. Believe me when I tell you, middle America is in real trouble. In much of the country they aren’t just in recession or even depression. Small town America is withering on the vine. I routinely go through towns where many or most of the businesses on Main Street are shuttered. Services are no longer being delivered and decay is prevalent. News organizations don’t cover this at all. Honestly, I had no clue. And it’s been going on for years. When I talk to people in these towns they tell me that their towns have been drying up for years. It’s been sobering to see that middle America doesn’t look like Mayberry as I once imagined.