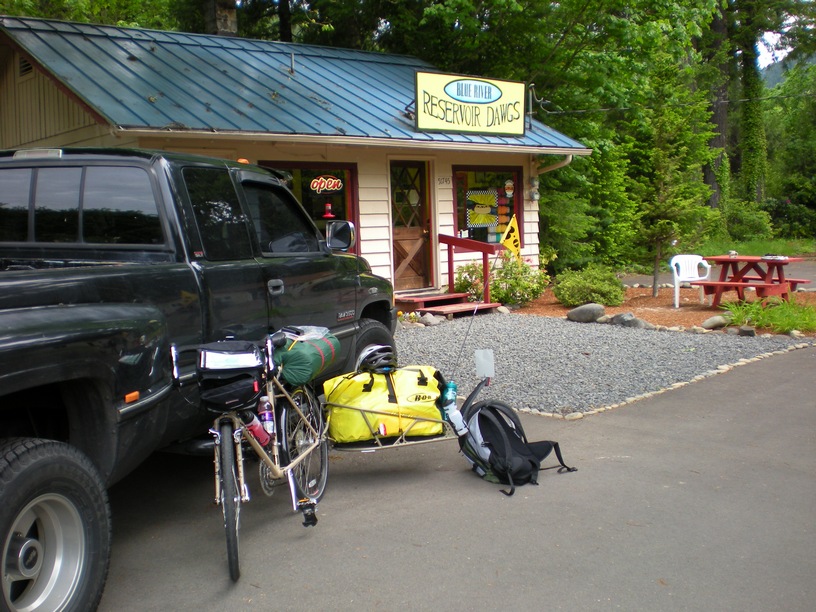 Greetings from Blue River, Oregon. Mile post 40 east of Eugene. So far I’ve covered 267+ miles since leaving Astoria and am now beginning to do some real riding. If you look at my trip log I’m averaging now well over 40 miles per riding day which is a far cry from how I started. Yesterday I rode from Eugene to Blue River. Today I begin my ascent of Santiam Pass which is my first real test in the mountains.

The weather has improved considerably and I am now riding without rain gear. Short sleeved jerseys the last couple of riding days. I ended up staying in Eugene an extra day because Chase Bank thought I was the victim of identity fraud again and closed my main account. Fortunately I was a couple of blocks away from a branch and one of the VP’s got things straightened out after a couple of hours – for now. Thank goodness I was in Eugene or it could have been a nightmare not having access to my money.

It has been less than two weeks and already this journey is turning out to be one of the more extraordinary times of my life. The people I’ve met so far have been incredible. As an example, yesterday I pulled into Blue River around 4pm exhausted, no more gas in the tank. There was a resort that I pulled into to ask if they had a room expecting they would for something way over my budget. The owner let me have his entire bunkhouse, probably well over 2,500 square feet for a few dollars. Amazing. I find people are so gracious, so generous once they hear what I am doing and why. Some people still think I’m off my rocker but heck, I’m used to that.

I’ll be camping the next couple of nights and then on in to Sisters, Redmond and Prineville and parts east. Once I get to the top of Santiam Pass it’s pretty much downhill for awhile so will try and make up some time and do 50 miles a day. My knee, which was really bothering me is doing much better and although my legs are tired most days I am physically better off then I was a week ago. As my dad told me, this first month is training which yeah, I should have done before.

Okay folks, off I go. The lady down the street promised me homemade biscuits and gravy before hitting the road and I can’t pass that up. Top off on Gatorade and as Willy Nelson sings – “On The Road Again……”