Greetings from Grangeville, Idaho. I’ve been in Idaho for a few days now and only 172 miles from Missoula, Montana. It’s been a treat getting out of the rain now for the last week or so and in fact got sunburned one day while riding from Halfway, Oregon to Cambridge, Idaho. 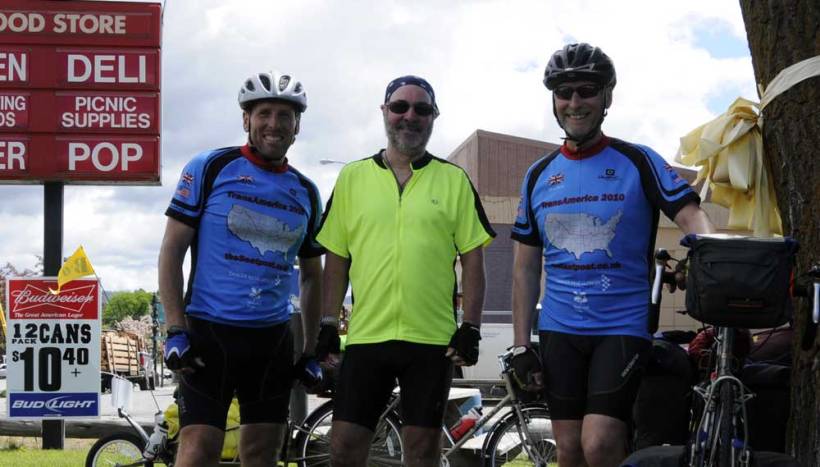 Me with a couple of Brits on the road in Oregon

I ended up spending a couple of days in Halfway. Its claim to fame is that the movie “Paint Your Wagon” was filmed there. Some of you more mature folk will recall that it starred Lee Marvin and Clint Eastwood with Clint having his one and only singing role. What I found out from the locals is that Lee Marvin was quite the party animal and Clint not so much. Lee would go to the Stockmen’s where I stayed and have a few cocktails each day after filming. Sometimes more than a few. From what I was told this was pretty much and an everyday occurrence. The other thing that the town is known for is being the home of Babette March, the first cover girl for the Sports Illustrated Swimsuit Issue way back in 1964. She owns a little lodge in town with her husband.

After a couple of days in Halfway I made my way to Cambridge, Idaho which is basically a sleepy little town. It was a long day so didn’t do a whole lot except refuel and sleep. The following day I went to New Meadows which was pretty much all downhill through some gorgeous landscapes. And then on to Riggins. Riggins of course is on the mighty Salmon River which is spectacular. As I was riding into town there was a bunch of people fishing the river. As I was riding into town a guy pulled a huge salmon out that was half as big as me. Amazing. I was told that salmon go for about $50 each and there’s a two fish limit per day. The native American’s smoke the fish they catch and sell it on the side of the road.

Yesterday I made my way some 45 miles from Riggins to Grangeville which is the county seat and a fairly good sized town. It was no piece of cake. There’s a 2,900 foot climb out of the town of White Bird to White Bird Summit and it was steep and long, about ten miles of climbing on a 7% grade. Even cars and trucks labor to make it up. I made it about half way up and just about gave up the ghost. After resting for a half and hour or so I made my way to the summit and was thrilled. It didn’t help that my rear derailleur wouldn’t shift into the lowest gear so alternated between walking and peddling. This morning I found a bike mechanic that helped me get all my gears working and now I shouldn’t have to work so hard on the steeper climbs.

Looking forward I have what promises to be a beautiful stretch into Missoula. I’ll be going over the Lolo Pass on highway 12 for those keeping score at home. I’m told it’s some lovely country. I did hear that the road is very narrow and some of the truckers aren’t fond of the cyclists. Lots of twists and turns with almost no shoulder so you have to drive defensively.

My plans call for me to make Pueblo by July 28th or 29th and meet my dad there. Should be doable even taking a little time off along the way to enjoy Yellowstone. We’ll spend a few days together and I’ll get my biked tuned up for the long flat grind across the plains during August when it’s hot and humid.

To date I’ve peddled some 814 miles and am averaging just over 40 miles per riding day. One thing I was not prepared for, something nobody told me about was the weird tan lines. When wearing cycling garb you get tanned in a very odd pattern. From mid thigh down I’m bronze and my arms too. My finger tips are tanned but the middle of my hands are white because of the cycling gloves. Very strange.

I hope this finds everyone well. I probably won’t have internet access until I get to Missoula so the next installment will probably be from Montana, Big Sky Country.

One Response to “Grangeville Eye-dee-ho”

I still ride several days a week. Here's a summary of my recent rides:
Activities for David Jones - RollingAcrossAmerica